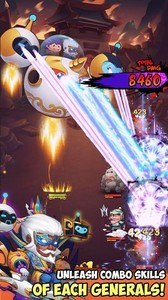 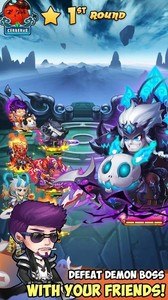 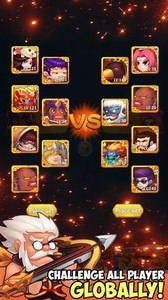 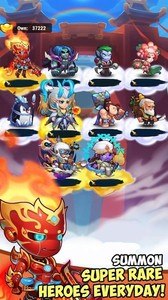 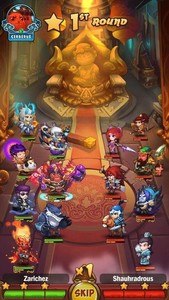 Here comes Crazy Gods, the most exciting Strategy RPG! Behold the Strongest General from 3 Kingdoms and Mighty Heroes from Journey to The West. Assemble your heroes to avenge the God of Underworld's wrath. Take part in the most exciting adventure to crush evil bosses or clash with other players to snatch their trophies and be the champion!

In this universe, things were going well and peaceful between Gods of Underworld, Sky, and Earth. Everything changed when God of Underworld was defeated during a card game against Sky and Earth Gods. He felt dejected, angry, and he grew suspicious of them both. As he unleashed his ultimate demon power, his revenge is unstoppable.

★Unique game play, Turn-Based Strategy RPG★
Addictive and Unique combination of RPG plus Strategy Game! Feel the adventure of Journey to the West and exciting battle of 3 Kingdoms. This game will test your gaming skill to fight with 7 heroes at once!

★Legendary Heroes from Popular Mythology★
Poweful Swing of Guan Yu from 3 Kingdoms, Mighty Stomp of Monkey King from Journey to the West and Blazing Flames of Na Zha from League of Gods will thrill you in the most breathtaking battle! Choose your all-rounder champions to accompany you in your journey!

★Summon your heroes for FREE★
Recruit heroes out of 3 realms: human, god, and demon. More than 300 hundred heroes and 3.000 formations. Build your strategy and be the strongest!

★Guild for all, all for guild★
Join or create guild with your friends and be prepared for the massive battle against other guilds. Claim your throne and reward through fierce battle!

★Unique Skills Combo with Stunning Animation★
Construct your formation with the best strategy, because a certain pair of heroes has abilities to unleash ultimate combo skills! Pair your 3 Kingdoms Heroes in unbeatable combos such as Guanyu, Liu Bei and Zhang Fei in Peach Garden Combo, along with Lu Bu & Diao Chan in their Lover Combo, Icy Fire Dance. Stunning, jaw-dropping animated skills will awe you!

★Cute Pet★
Go on an adventure alongside your adorable pet that gladly assists you. Collect and raise your pet! It can help you in battles by unleashing lots of different supporting skills!

★PvP System★
Challenge and beat your opponent using the best formation and strategy. Battle your 3 Kingdoms generals with the gods from League of Gods and Journey to the West! Reach top rank and rule the Universe!

★World Boss★
Once, the Immortal Dragon almost destroyed the universe. Now he makes his comeback! Join forces with thousand player on server to defeat the Dragon. Epic loot awaits!

★Features and Events★
Endless events are waiting for you, starting from daily, weekly with massive rewards! Claim free gold, gift pack and other awesome perks in 365 days. You won't skip a day to play Crazy Gods.