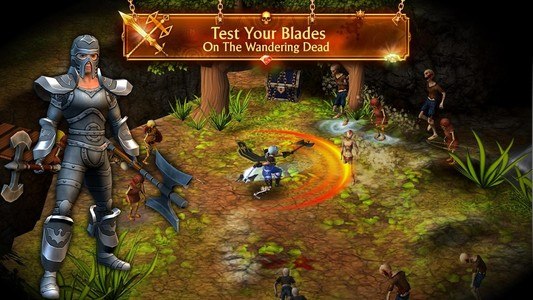 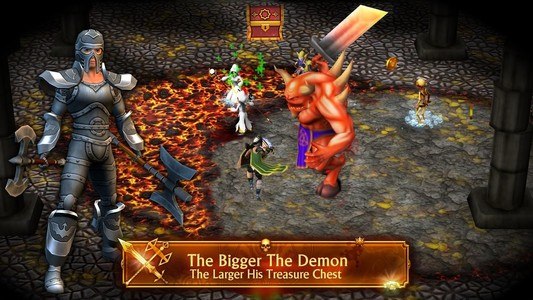 Eternium is an amazingly fun and beautifully crafted Action RPG, reminiscent of the great classics Diablo and Torchlight.

Eternium stands out from other mobile Action RPGs, like Dungeon Hunter or SoulCraft, by its effortless “tap to move” and innovative “swipe to cast” controls, and its player-friendly “no paywalls, never pay to win” philosophy.

With the exception of a couple of online-only features, the game can also be played offline after the content download completes.

Drawing signs to cast spells is easy and rewarding. The tap-to-move control is more natural and relaxing than thumbsticks, and it’s also truer to the vintage point-and-click Action RPG experience.

The game can be really played for free, as more than 90% of our players do. Purchases are completely optional. Gems, the game’s main currency, can be collected from enemies and quests. There is no limiting stamina or energy. The best things in the game are obtained by playing, not paying.

Eternium has been launched in 2014, and is actively being improved by the original development team. Through years of polishing, and feedback from millions of players, the quality of the game has steadily increased, making it now one of the highest rated games on all app stores.

As of spring 2017, major new features are in advanced stages of development, including real-time multiplayer, town portal, and a fourth world.

Play as a Mage, Warrior or Bounty Hunter, wielding a sword, axe, staff or gun. Level up to learn new abilities and increase your attributes.

Venture into dark caves and dungeons, explore forests, villages and graveyards, lay siege to demon controlled castles, brave snowy mountain peaks, travel to the moon to slay strange creatures among craters and canyons, and beyond, to the deserts, pyramids and jungles of the red planet.

Rescue your tank, healer and ranger companions who will join you in battle. Use their abilities together with yours to create rewarding and powerful tactical combos.

Experience a refreshing storyline, filled with interplanetary intrigue and seasoned with funny characters. Hunt your arch-enemy, Ragadam, across the worlds, while trying to uncover and undo his twisted plans.

Progress from common to rare, epic and legendary gear. Find gemstones that fit in your armor’s sockets. Craft socketed rings and amulets, and fuse three of them into a higher quality one.

Unleash awesome offensive abilities, such as Whirlwind, Shockwave, Arc Lightning or Blizzard, control the enemy crowd with Frost Nova, Vortex, Silence, or sneak and assassinate with Smokescreen, Traps and Snipe.

Each hero class has access to about 20 abilities (skills or spells), and each of your three companions has four more. The game starts simple, but culminates in a flurry of tactical possibilities at high levels.

Once your hero reaches level 70, your experience points go into Champion Levels, which are unlimited and yield steady stat upgrades. Champion Levels are also inherited by your new heroes, so they will have an easier time growing up.

Aside from the three story acts, an endless progression of beautiful, randomly generated levels awaits in the Trials of Valor game mode.

Eternium is crafted with passion by a small band of old-school RPG fans, who love making the game they always wanted to play.
›

Download Mage And Minions 1.4.16 APK Android Game for free to your Android phone

Alternative Games to Mage And Minions