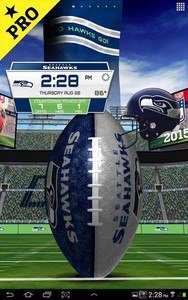 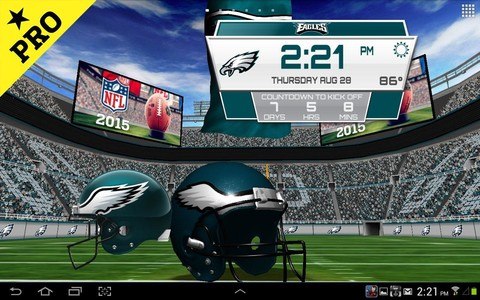 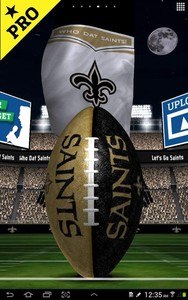 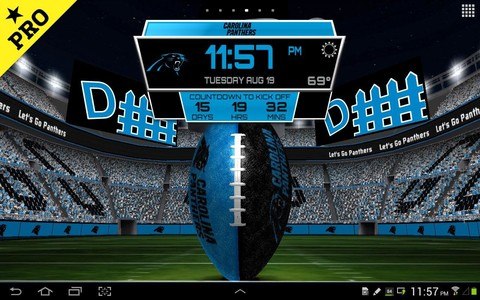 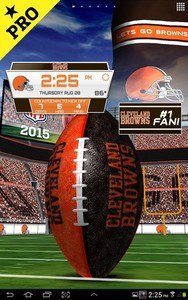 Popular features from the official NFL Live Wallpapers of past seasons, like the Talking Clock Widget with Next Game Countdown and Live Scores during your team’s games have returned for another round of action!

Free to download and comes with one complementary NFL themed LWP. Pay to instantly upgrade to your favorite team or UNLOCK ALL for an all access pass.

Unlock your favorite team now for only $3.49 and get unlimited access to all NFL team live wallpapers, clock / score / sticker widgets, phone contact avatars, team calculators and ringtones on your mobile device or tablet!

For the NFL super fans, you can unlock all 32 teams and their respective content in-app for just $8.99!!

Many New & Returning Features for the 2014/2015 NFL season:
- New look for the clock widget, which still contains Scores, Game Countdown, Time, Date and Weather; ALL right on your homescreen with Announcer sounds and features!
- New BIG BALL MODE spinning team football! Choose between that, the (regular size) team football, team helmet and the official (regular size) football of the NFL.
- DAY and NIGHT detection within the Stadium.
- SMS and GMAIL alerts with Announcer audio.
- Team Ringtones.
- Live Billboards, statistics, holiday features, and much, much more!
- Updated regularly.

This dazzling collection of live wallpaper allows you to stay connected to your NFL team of choice regardless of whether you’re at home or on the road.

Are you the biggest NFL football fan in the world?

Then paint your phone with your team's colors today using the only officially licensed LWP series by the National Football League!

*Free to download and comes with one complementary NFL themed live wallpaper
*Only $3.49 to upgrade to your favorite NFL team, $8.99 to unlock all content for all access.
*Multiple camera angles when viewing a team’s helmet or football.
*Made with official release software to ensure quality and performance
*Officially licensed release from the NFL
*All 32 teams have a live wallpaper available for in-app purchase
*Fully optimized and supported on tablets
*Performance may vary on small screen devices.