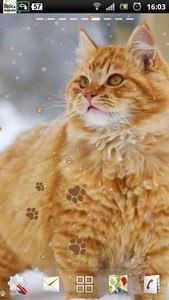 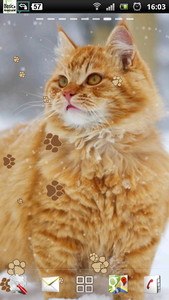 The domestic cat (Felis catus or Felis silvestris catus) is a small, usually furry, domesticated, and carnivorous mammal. It is often called the housecat when kept as

an indoor pet, or simply the cat when there is no need to distinguish it from other felids and felines. Cats are often valued by humans for companionship and their

Cats are similar in anatomy to the other felids, with strong, flexible bodies, quick reflexes, sharp retractable claws, and teeth adapted to killing small prey. Cat

senses fit a crepuscular and predatory ecological niche. Cats can hear sounds too faint or too high in frequency for human ears, such as those made by mice and other

small animals. They can see in near darkness. Like most other mammals, cats have poorer color vision and a better sense of smell than humans. adorable, incredible,

Despite being solitary hunters, cats are a social species, and cat communication includes the use of a variety of vocalizations (meowing, purring, trilling, hissing,

Cats have a rapid breeding rate. Under controlled breeding, they can be bred and shown as registered pedigree pets, a hobby known as cat fancy. Failure to control the

breeding of pet cats by spaying and neutering, and the abandonment of former household pets, has resulted in large numbers of feral cats worldwide, requiring

Since cats were cult animals in ancient Egypt, they were commonly believed to have been domesticated there, but there may have been instances of domestication as early

A genetic study in 2007 revealed that domestic cats are descended from African wildcats (Felis silvestris lybica) c. 8000 BC, in the Middle East. According to

Scientific American, cats are the most popular pet in the world, and are now found almost every place where people live.

======
NOTE :
======
- All permission are required by Airpush and Startapp ad network
- This live wallpaper is compatible with Go Launcher EX
- Battery Efficient
- For ICS phone such as Galaxy S3,if you unable to scroll your wallpaper try to install Go Launcher EX from market as your default home screen launcher
- Optimized for Galaxy S3 and S4
›