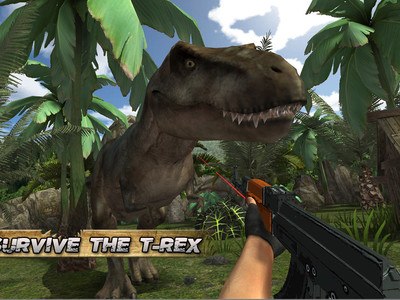 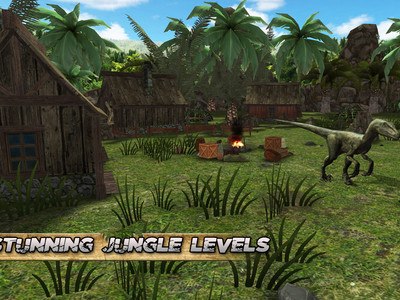 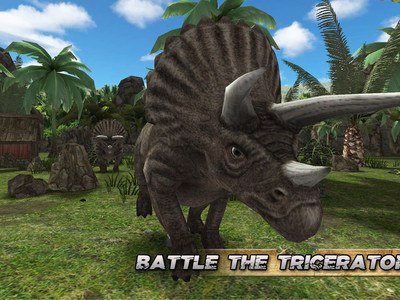 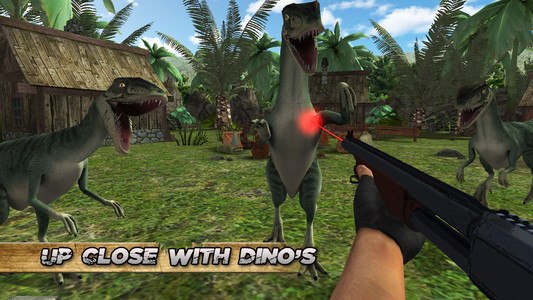 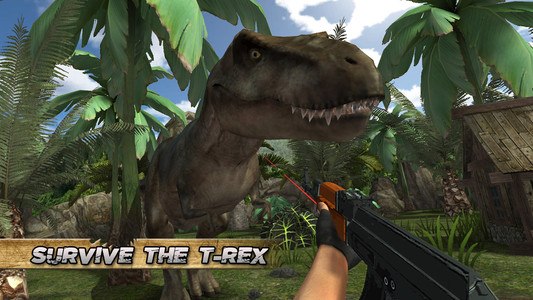 This action shooter takes players to a tropical island that is filled with prehistoric creatures. As a stranded archeologist, you will need to overcome ferocious dinosaurs such as Triceratopses, Velociraptors, and enormous T-rexes.

The outbreak
Explore the sandy shores and dense forests of this tropical Jurassic Island, but beware of the many dangers that inhabit this world. These ancient creatures are no pets and you will need all your wit and survival skills to stay alive. This is no walk in the park, this is a full fledged war between both species. The planet’s D-day is here and you are the only one that can save human kind.

As a lone survivor you will need to fight for your life and overcome endless waves of deadly dinos. Players are armed with a wide and devastating array of upgradeable weapons. Survivors will be putting these weapons to the test against de dinosaur thread, including and huge end-stage bosses. Ammunition for special weapons is scarce but can be replenished at the in-game store or can be found as loot on corpses.

Fortunately, the standard pistol never runs out of ammo and can always be used as a last resort. In addition to firearms, health items and multipliers can be scavenged from the battlefield. Dig in, stay focussed and land headshots. Complete your survival quest and escape from the island!

Five weapons are gradually unlocked as players level up and each can be upgraded to increase firepower, enlarge clip size and improve reload times. Skilled survivors can use the environment to their benefit by collecting hand grenades and shooting explosive barrels. Lucky survivors even can unlock the beserker mini gun, which is very powerful and effective against larger foes and boss enemies, but will also act as great multiplier builder.

*** WEAPONS AND UPGRADES ***
★ ASSASSIN PISTOL (baby size pistol that packs a punch)
Your trusty pistol with unlimited ammo. Your last resort and primary side arm.
★ AK-47 (Kalashnikov)
This assault rifle is famed for its trustworthiness, accuracy and is fitted with a red dot scope for even better marksmanship. Now you can hit the Tyrannosaurus Rex right between the eyes!
★ HUNTER SHOTGUN (Accurate laser guided strong-arm)
This shotgun packs a punch and is really effective for killing off the smaller enemies at close range. Ammo is limited, but this is your ticket for optimal crowd control.
★ THUMPER (whispering at first and then it will do all the trash talking)
It is all in the name. Listen to the sweet soft thumping sound... followed by a LARGE EXPLOSION! This is your tank weapon that is ideal for doing major damage!
★ SNIPER (super accurate firepower)
Snipe the dino threat dead before they reach you. You can see them coming from miles away. Finding the odd ammo box is difficult as they are scarce, but this accurate weapon is highly effective.
★ BESERKER GATLIN GUN (heavy duty blaster)
This gun is not a part of your arsenal, but you can find it at random. This is shooting at its finest. Use it to decimate the ranks and go on a rampage!
★ UPGRADES
By collecting rupees and money from the battlefield you can upgrade your weapons. You can enlarge clip size, snap in extra magazines, fortify your bunker, improve firepower and make reload times quicker. What to upgrade first is your call!

AMMUNITION
Ammo can be collected in two ways. Either you stock up at the in-game store or you shoot the ammo crates, dropped by fallen enemies. You don’t have to do a runner to fill your clips. Find eggs to unlock special abilities.