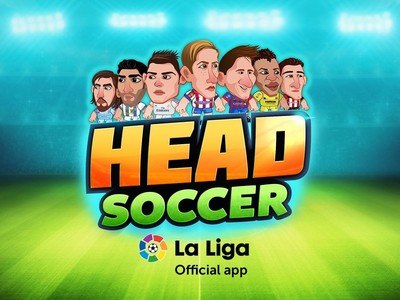 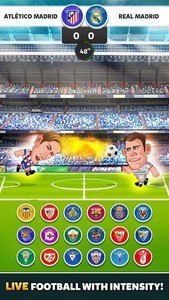 HEAD SOCCER LA LIGA is the official game for Spanish League Football for 2016-2017 season! Choose your favourite football player among the official LaLiga squads, unleash your powerful shots and take your football club to the top of the world rankings! Score thousand of goals using the big head of your footballer and become the ultimate champion and the hero of your dream team!

Download now for free and enjoy playing soccer with all the football clubs and superstars from LaLiga!

Start as a newbie and level up through all categories: rookie, professional, champion, all-star… and finally reach the top of the world and be a football legend. Impress the FIFA and the fans by scoring incredible goals in the best official football stadiums: Bernabéu, Camp Nou, Calderón, Mestalla, San Mamés, Riazor, La Rosaleda… What is your favourite soccer club? Select a football team from the dream league and play as a mini footballer with a bobble head. Goalkeepers, defenders, midfielders, forwards... only Head Soccer LaLiga 2017 has all the official football players from LaLiga!

Join millions of players in this exciting football game and enjoy playing with all your favourite footballers: Cristiano Ronaldo, Messi, Aduriz, Neymar, Fernando Torres, Orellana… Now you just need to choose your big-headed soccer player, get out on the field, show off your skills and win tournaments!

Only the best players are able to take on this challenge! Show off your ball skills and beat each round as though it were a final! Try to survive in the most astonishing football matches jumping as high as you can, kicking stronger and sprinting faster than all your rivals. Score amazing goals in every clash and win all the cups, leagues and tournaments to be the hero your fans are looking for.

Be careful not to neglect your goal, because you must to defend it from your opponent shots and attack wisely to defeat them and become the new soccer star of the Spanish Professional Football League. Are you ready to overcome the challenging Sudden Death?

Do you think you've got what it takes to be a CHAMPION? Download Head Soccer LaLiga now!

OFFICIAL LICENSES FROM LALIGA
Play football in real stadiums with all your idols. The only football game with the original clubs and squads from the Spanish League Soccer for 2016-2017 season!

TRAIN AND IMPROVE
Evolve your football players and their skills: SPEED to move quickly down the field, SHOT to make it unstoppable, JUMP to leap higher in each attack and defense, SPRINT to overtake your rivals, POWER UP to reduce the time between special shots… Level up and be the ultimate score hero!

GAME MODES
Try the CUP, where champions are remembered! Go down in history through all of the rounds and enjoy playing in the Final Cup!
Start a FRIENDLY match and play football against any club you want!
Consistency is key to success in the LEAGUE! You must face all of the teams and gain points match by match to ranked at the top by the end of the season.
How many rounds could you survive in the SURVIVAL mode?
Make your own huge head football player with the amazing EDITOR!

BEAT YOUR FRIENDS
Sync your progress with Google Play Games and Facebook, overcome your friends and share your achievements: How many goals could you score? Could you win the match not using the special shot? Are you a perfect mix of goalie and striker?

Even Luis Figo has fun playing Head Soccer LaLiga, check it out: http://laliga.es/en/video/sportel-visita