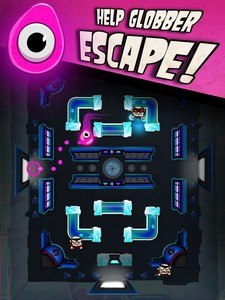 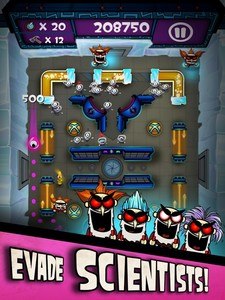 The International Coalition of Evil (ICE) thinks Globber may just be the key to global domination.

Globber is a gelatinous pink mass with the potential for mass destruction… but he wants no part in the Mad Scientists’ plan to take over the world!
Furious, ICE imprisons Globber in the heart of their secret laboratory. It's up to you to help Globber escape!

In this touchscreen-oriented rejuvenation of classic Pac Man style gameplay, you control Globber as he bolts through through the chambers of a secret laboratory!

-Simple controls: Just tap where you want Globber to go!
-Gobble up Flunkies without alerting the Mad Scientists to your escapades!
-Gobble up Power-Bots to turn the tables and chase the Mad Scientists!
-Pick up hammers and give Globber a second chance after being captured!
-Spin to Win! An end-of-session slot machine mini-game gives you an opportunity to win a second chance or extra bonus points!
-Compete against friends through Google Play Games Leaderboards.
-35 Achievements
-Endless Survival-Based Play Sessions