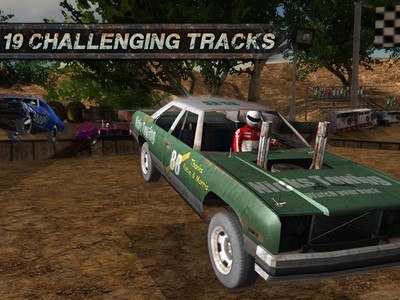 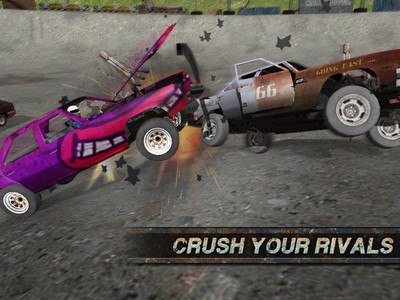 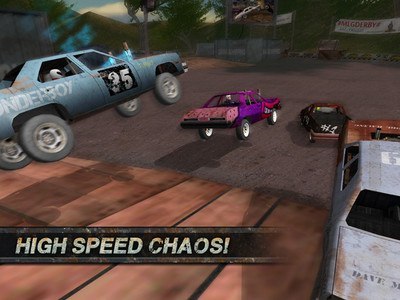 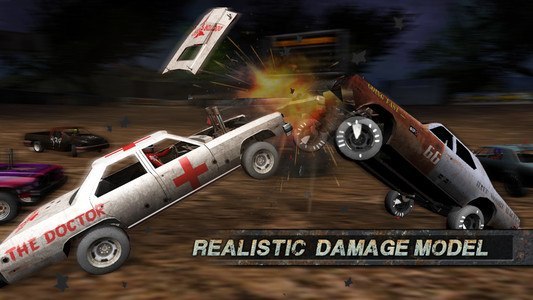 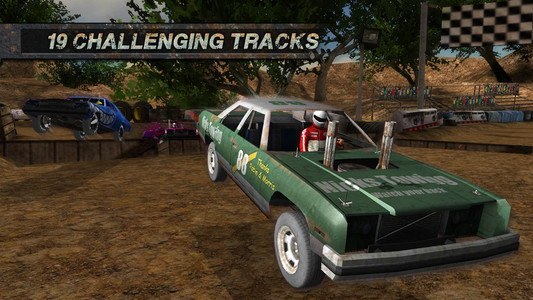 Get ready for the ultimate arcade racer! How long can you survive the arena? Smell the petrol fumes and enjoy the carnage!

Some of the awesome features of this game:
★ Explore many events, including "last car driving" and demolition races (arena, 8 track, ovals and speedway)
★ Intense high speed racing action
★ Real-time car destruction and damage deformation + crash physics engine
★ Choose between three thoroughbred all American muscle cars
★ Customize and improve your car by earning or buying upgrades
★ Incredible visuals and solid performance on a wide range of devices
★ Choose and modify your control system to facilitate your driving style
★ Realistic car wreckage and debris simulation

Get ready to race and destroy your opponents in demolition derbies and full track speedway racers that will offer you the thrill of a lifetime. Destruction has never felt so real as you see doors and other car parts smash of your car.

Tracks and events
The game offers various tracks and events across the nation for endless racing and destruction driving pleasure.
★Arena Demolition Derbies★
Play the traditional demolition derby events in an arena. All drivers start in opposite directions and the goal is to smash the other cars and be the last man (car) standing to win the race.
★Race track / speedway events★
You can also drive on race and speedway tracks which gives a different type of challenge and experience. These races are referred to as a banger racing (for British and Europeans) and are mostly referred to as enduro racing in the United States. During these gatherings you are invited to race on (dirt) race tracks and you can try to win by reaching the finish first or through endurance as you disable your opponents and survive to be the last (man / car) standing after the racing carnage. The quest for destruction continues in the latest version that now also includes enhanced day and night scenery. Try to master all tracks with different vehicles and and test your driving skills to the max as you aim to complete all tracks with the full 3-stars!

Some game-play tips
Have fun smashing and destroying your adversaries, but understand that the game is a quite accurate simulation of the real thing! In this derby simulator limiting car damage is key to becoming victorious and how you smash into other cars makes a big difference. Always try to smash rivals in the side of their vehicle or from the rear. A reckless head-on collisions on the other hand should be avoided to prevent your engine to die or other extreme damage to occur. To boost the damage you inflict on an rival you can get your motor rev up and run faster by using the nitro boost. Nitro boosts and other power-ups can be purchased before the race.
Upgrades
The current game version allows you to pick from three cars (muscle, classic stock car, or armored pick-up truck). These all have the pros and cons. Be sure to upgrade your cars wisely as the various type of events require different cars. Use armor upgrades to strengthen your endurance; or engine upgrades to boost your speed. To get your upgrades you earn money during races. The better you perform the more you earn.

UPDATE NEWS
Thanks for all the great feedback. We are working on awesome major new updates throughout 2015.
New in the 1.2.0 update:
★ NEW CARS including an all American classic car with superb handling and drift capabilities
★ ENDLESS MODE - compete against other players online for the Google Play Services high-score
This is a survival mode in which you'll see how the bulldozer will drag your destroyed rivals of the ranch and new wannabees prepare to enter the arena. Between rounds you take a short pit-stop to regain some stamina.

So stay tuned and rush to join the mayhem as we bend some serious metal in 2015. If you like demolition derby games this is the place for you.