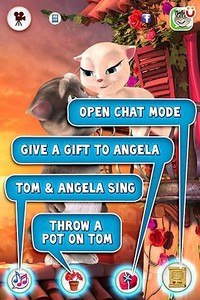 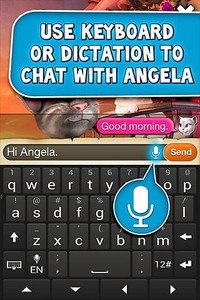 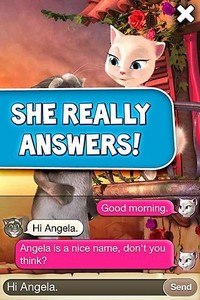 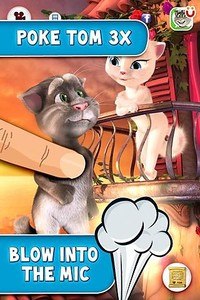 Talking Tom has climbed all the way up to a rooftop to get a glimpse of Angela. He is trying to woo Angela by repeating your words to her, singing a song, having a chat with her and by giving her gifts.

But Ginger is there too, trying to mess things up for poor old Tom.

NEW: First Talking Friends app where a character answers back intelligently. You can actually have a conversation with Angela (ENGLISH ONLY). Hours and hours of intelligent and sometimes hilarious chatting.

★★★ HOW TO CHAT ★★★
✔ Press the Letter button to enter chat mode.
✔ Complete an offer or make an in-app purchase to chat with Angela.
✔ Use the keyboard to type or use dictation (ENGLISH ONLY).
✔ Tom will give your message to Angela.
✔ Angela will then answer with text and voice in English.
✔ You can talk to Angela about a variety of subjects: love, dating, friends, school, fashion, celebrities, movies, music, TV, books, hobbies, food, travel, pets etc.
✔ If you want Angela to tell you a joke, just type: tell me a joke.

LEGAL NOTICE: We are collecting anonymized data log files containing details on the usage of the app. More details: http://outfit7.com/privacy/